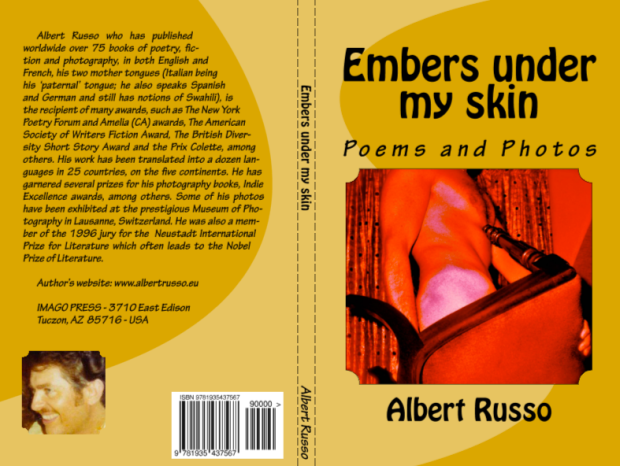 You have signature styles, in both your novels and your prose poetry. Can you tell the readers how your styles of writing have changed over the course of your literary career? Upon reflection, do you feel that your style of writing has been influenced (directly, or indirectly) by any particular authors?

As you know I have three different styles that correspond to three different genres: my African novels, my gay novels and my humorous Zapinette series -, not mentioning my SF and fantasy stories. People who are not acquainted with my writing or just know one of my styles, think that the other two belong to two different writers. And of course I also write poetry – a fourth style?

This eclecticism of mine confuses French publishers and, if interested in one of my novels, they are loath to hear of my other styles. After years of discussing this aspect of my writing, I finally got in touch with a publisher, Editions Hors Commerce, here in Paris (it folded 5 years ago) who understood my literary persona and she took the risk of publishing my work in its entirety, but I won’t find easily (or never again) a person with such a broad mind.

The authors whom I like and admire are so numerous, it would take me hours to mention them. Suffice it to say that among them are the French, British, American, Russian, German, Italian and Spanish classics in both prose and poetry. Other treasured sources are the Bible, especially the Thorah, Flavius Josephus, the Roman-Jewish historian, the Indian Upanishads and the Mahabharata, the Chinese Tao and Confucius, the ‘delicious’ 1001 Nights, Masaka Shiki who invented the wonderful Haiku and, finally, my dear African ‘griots’ who are the masters of oral literature. Then there is a plethora of modern authors from around the world, from Joseph and Philip Roth, to Tagore, Santosh Kumar, Khaled Hosseini (Afghan novelist), Graham Greene, P.G. Wodehouse, Mafouz (Egyptian writer), Marcel Proust, Albert Camus, Adam Powell, Martin Tucker, David Alexander, Italo Svevo, Alberto Moravia, Pasolini, Amos Oz, Etgar Keret (both Israeli authors), Chinua Achebe, Yasmina Khadra (Algerian novelist) Nadine Gordimer, Basho, Ishiguro, Coetzee, Tennessee Williams, Carson McCullers, In Coli Jean Bofane (Congolese novelist), Pavese, Italo Calvino, Gabriel Garcia Marquez, Miguel Angel Asturias, Garcia Lorca, Gao Xingjian, Stefan Zweig, Herman Hesse, Hugo Claus, Mikhail Bulgakov, etc… etc… and I keep discovering new authors from the five continents all the time, so that this is a never-ending exercise.

For the sake of new authors who are finding their way, would you recommend beginning authors to attempt to mimic the styles of established authors to any degree, or rather to listen to their own “inner voice” and strike out on new paths from the start?

You have a descriptive style of writing, full of sensual imagery … perhaps rather “classical”. Many readers prefer to read a novel as a complete “passenger”, entirely subject to the lead of the driving author; while some other contemporary authors now experiment with leaving a greater degree of comprehension to the reader’s own intuition and recognition of his/her own personal experiences. How important and relevant is it for you to selectively weight the descriptive passages, and what are the difficulties and challenges with such an endeavor, in your eyes?

I write as my innermost being dictates me to write: it can be very classical in the description of African landscapes, sensual – some even find it pornographic (I no longer make any distinction between these two) – when I tackle gay or heterosexual love scenes. Some critics claim that I am a post-modern writer. I’ve never been comfortable with labels or categories. When I want – need – to write about gay sex, I write about gay sex and don’t give myself limits, i.e. when I write for adults.

These are difficult questions, I know. And it is also not easy for authors (and often not popular) to explain their work, or their processes. But these questions are quite interesting for many fellow authors (at all stages of literary development and achievement) so please bear with me.

As a novelist, poet and essayist you approach volume and speed of presentation differently, as would be expected. How do you personally ascertain the weighting of literary upbringing up against the rebellion of personal spirit in the creative process?

As I have mentioned before, I love to discover new writers but I also go back to the classics regularly. The more I advance in age, the freer I feel with my writing.

As an author that has written and published more books than most can dream of, how do you now – looking back – see the influence of publishers and readership upon your styles of writing? Is novel-writing (your primary output in terms of published books) more susceptible to acceptance, rigors and demands of publishers, and feedback/expectations from readers, than poetry and essays, or do you more or less write what you choose and in the styles that you write … and prefer to let the “public” catch up when they are ready?

We all know that novels and nonfiction have a much greater chance of getting the attention of publishers than poetry or short stories. There are times, though, when one is overwhelmed with personal or health problems – a pretty frequent occurrence in my case -, and that is when I write poetry and maybe a very short story. Poetry, as far as I’m concerned, is mostly therapeutic, it is my drug, my cigarette, my whiskey. Thank God for poetry. Whereas fiction requires regular hours and a strict discipline, I can – or feel compelled to – write verse at any time of the day or the night.

And finally, how is choice of style associated with your choice of theme, genre and literary language, etc.? I realize that much of this is intuitive, but there is also much learning and experience behind these decisions and processes. Please share with our readers your own personal perspectives.

You said it: most of it is intuitive and depends on the general mood I am in before I tackle a subject. There are periods in which I have to ‘return’ to my African roots – when I am guided by both what happens on the continent right now and by nostalgia (they usually go together). Then there are times where I need to go very far away and create a totally new environment, and that is when I write fantasy or SF. So, it is not true, as in my case, that one should strictly adhere to one’s life to or to what one knows. Look at Kafka, for instance, writing about America, when he never set foot on the New World. Of course, you have to be sure about what you wish to say to your reader, in order to launch yourself into a such a risky adventure.

Thank you once again, Mr. Russo. In Part Three we shall have a look at the story of your transition from being a heterosexual family man to a gay/bisexual family man, and how that has influenced your literature.

The following biography of Albert Russo is reprinted from his website: www.albertrusso.eu

A bilingual author, Albert Russo writes in both English and French, his two “mother tongues” ; he also speaks five languages fluently and has lived in Africa, the United States and Europe. He is the recipient of many awards, such as The American Society of Writers Fiction Award, The British Diversity Short Story Award, several New York Poetry Forum Awards, Amelia Prose and Poetry Awards and the Prix Colette, among others. He has also been nominated for the W.B. Yeats and Robert Penn Warren poetry awards. His fiction, which has been praised by James Baldwin, Pierre Emmanuel, Paul Willems, Gilles Perault and Edmund White, has appeared worldwide in a dozen languages.

PROCEED TO PART THREE OF THE INTERVIEW!

WHERE TO BUY THE BOOKS OF ALBERT RUSSO