of the Great Compassion

to find completion in

falls upon the Earth;

THE FUTURE IS NOW.

Just for a moment

Catch a glimpse of

Into the light of

With the illusion of the

And in my stupor I

Of a forgotten incarnation,

Wilting as a black rose

Run up and down the

Trying to dodge the raindrops.

And just as you speak

I find myself on my hands and

And quite uncontrollably, a single

Pocket of my left eye as I

There is nothing more beautiful

And yet so sorrowful as

A man’s tears over humiliation

And loss, cradled in the bosom

And rapids, thunder and lightning

Against a purple, grey and orange

Sky – in betrayal of a lifetime of

For breath – beckons and

Invites him to join her in

A clumsy pavane, until

Rock the fallen one back

From the crevice of

At the end of time,

And whimpers accede to

Retrieval of pride and

Passion in the guise of

We lie back and

To be shared in symbolic

Celebration after an intergalactic

Battle between brazen faith and

Tucked in between my back

And the thin Styrofoam mattress;

Your head buried in my chest

And your matted hair still wet from

Our midnight dip in the Styx.

Who would have guessed that

The heaven of our making

Characterized by the mundane,

Of surrealistic struggles for

Survival: win or lose .. all

As the moon eclipses, the last

Sight I see before I drift off

Is the withered bonsai in the

Opening of our pre-war dwelling.

A reminder of a time when

We still dared to sleep soundly;

Dreams in the style of our ancestors.

I have come to accept

the threat of the first horseman,

on his mighty white steed –

causing in me a seemingly

caution and readiness, and

I have sadly learned to expect

the relentless ravages of

brought on by the

rider on the red horse,

and the pestilence in the

saddlebags of the black steed.

who arrives each dawn

on his pale mare and

reclaims from my broken dreams

the yet unlived memories of our love. 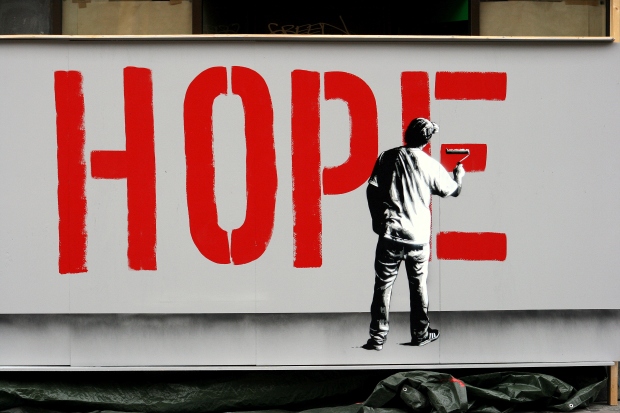 the power of the sixes,

of fear and perdition –

rationalized by armies of

is perhaps echoed in

not directly affected by

the ravages of persecution,

of love and compassion

no longer dare to

fear of getting caught

city halls are the

of the insane and

about the rubble of 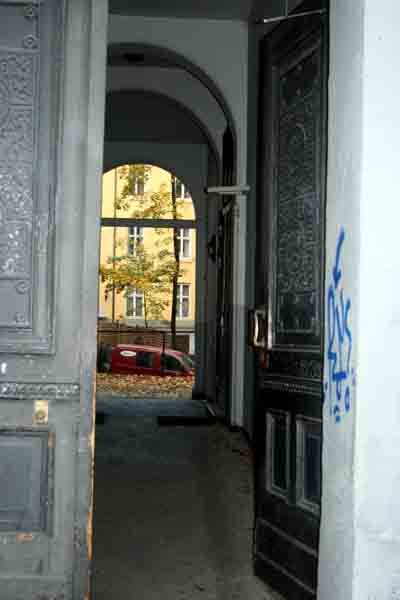 Once fresh air is

With the odor of

Look on with fear

Laughter a parody of

If one listens closely

One can hear a requiem

For a milder Age that ended

The endless journey of

Trying not to see or hear

Their most prized possession:

Hope that there is more

Meaning to be grasped

For he who holds out

Beyond the bitter end.

I see a muse

Of a monk’s choir;

And I cling tightly to my

Tears of joy and recognition

Rock me lovingly back to

A moment of bliss

Although our backs are broken,

And our wings are tattered;

Our hearts and souls

Will forever sing your praises.

There is only one God,

But the ways to You are many. 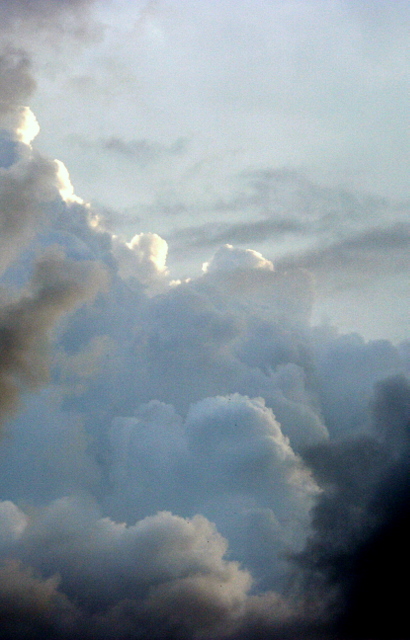 “In the valley of the Kingdom” is part of my book entitled “Rapture: endings of space and time”.

IN THE VALLEY OF THE KINGDOM: a poetic fantasy.

In the great Valley of the Kingdom,
over-shadowed by Dorje Lakpa, Gauri Shankar,
Gyachungkang and Sagarmatha, the
rantings of a poet savant in the Old City
signal the commencement of Nawa Ratri.
Her sole audience consists of the monkeys and
the beggar children, for all citizens and pilgrims
are otherwise disposed; but all sense the onset
of imminent menstruation with innate fervour.
Scurrying about under the waxing moon,
last-minute shoppers scour marketplaces
and stalls in preparation for the coming rituals
of purification by blood and offerings in
supplication to the Goddess Durga, in all
her manifestations of life force and fertility.
And wafting from open windows is the
scent of Vijaya Dashami, flowers and
cooking vegetables, increasingly overcoming the
diesel fumes from the trafficked streets below.
Through an ajar door I glimpse a prayer in progress,
in salutation to the God in us all and I smile,
murmuring “Namaste” to the tilak-adorned
inhabitants chanting in submission to the Almighty.
My heart pains for the unfortunate beyond the
Kingdom who suffer loneliness, hunger,
war and terror without ultimate joy and release;
strangers to our ways although still brothers and
sisters in the Great Scheme.
They live in Iraq, Gaza and Darfur, and even in the
sprawling urban centres of the Americas and Asia.
In my mind’s eye I give an offering of Light
for these beloved neighbours and pray that also
their darkness and burdens find relief in the bosom
of Divine favour, while a gentle rain shower
soothes the heat from my own transgressions.
I awaken with a start .. in a pool of sweat and tears.
Gazing toward the window I can see the rising sun
juxtaposed against the crumbling rose-coloured
temple in the foreground; almost mocking the
distant luxury hotels, still caught in the shadows.
A cock is crowing – to the accompaniment of
the poet savant; both announcing the advent of
the Ghatasthapana. 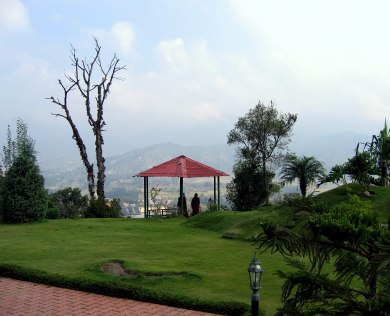 AT THE BUDDHIST TEMPLE.

The words of the poet savant are forever imprinted
upon my palms, forehead and heart – as clearly as the
unmistakable image of the great bodhisattva Kuan Yin.
The secret of the veil behind the veil is encoded
in the diamond; for while there are many ways to
enlightenment the highest wisdom is attained through
the Great Compassion, and self-realization is the only
homecoming recognized by the disciples of Vajrayana.
And thus, we step beyond the world outside of worlds
where karma is but a balancing act together with
punya-making, chance, luck and physical laws;
and approach the inner reaches of devotion with
complete individual and collective unity – for
all else belongs to the world of maya.
The vajracarya in me receives the Lord as my
guest and personal extension, and together we
dance through barriers known as illusion.
Our devoted compassion together with the refraction
of the light of the candles activates our heart, throat
and crown chakras – thus creating the perfect
Adamantine vehicle for illumination known as the
Great Source and Center, and all mantras coalesce
into one as flames and thunderbolts consume our
delusion and transform our essence:
“OM VAJRAPAANI HUUM .. OM VAJRAPAANI HUUM ..”
And finally we give birth to the God within ..
without reservation; and in generous libation. 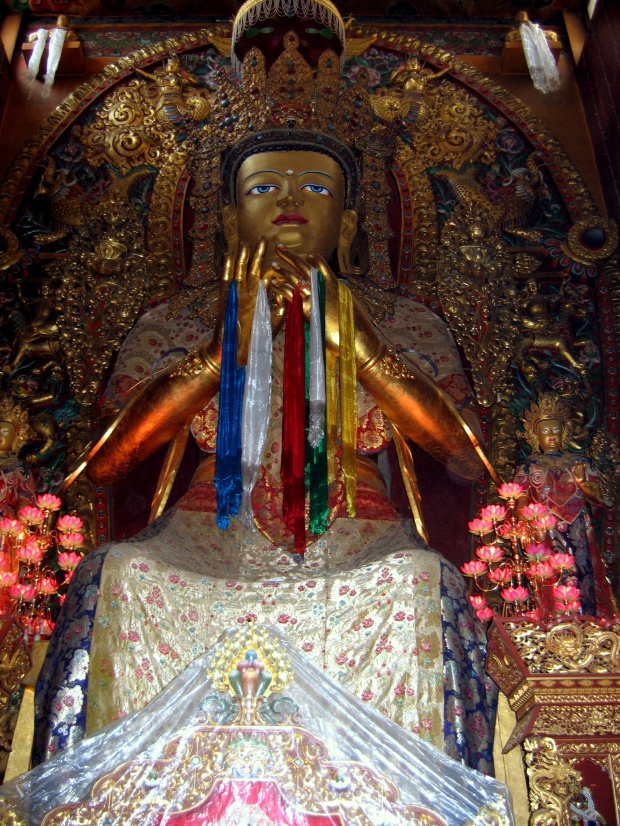 And on the seventh day, all subjects of the Valley and
beyond are ecstatic as the awaited procession arrives
from the royal house in Gorkha – bearing the jamara and
other provisions for the Tika.
So grand is their finery on the Day of the Fulpati;
and all hearts beat as one as the parade makes its way
to the Hanuman Dhoka Royal Palace.
In the midst of the celebrants and onlookers I see the
poet savant, smiling and keeping watch over the
splendid palanquin carrying the royal kalash, stalks of
banana, sugar cane and jamara.
His Majesty the King oversees the magnificent ceremonies
at Tundikhel, and the sounds of guns fill the Valley in
commemoration of the great thunderbolts which so resolutely
echoed over the mountains in the time of our forefathers.
As the last gunshots resound and the jubilant crowd breaks out
into a deafening cheer, the royal fulpati disappears inside
the Dashain ghar, and the feasting begins to the
accompaniment of a rock band.
And while the joyous crowds dance and make merry the
poet savant has already retired to her designated spot in the park
and prostrates to the Goddess offering incantations and
flowers – certain that the gods will be generous. 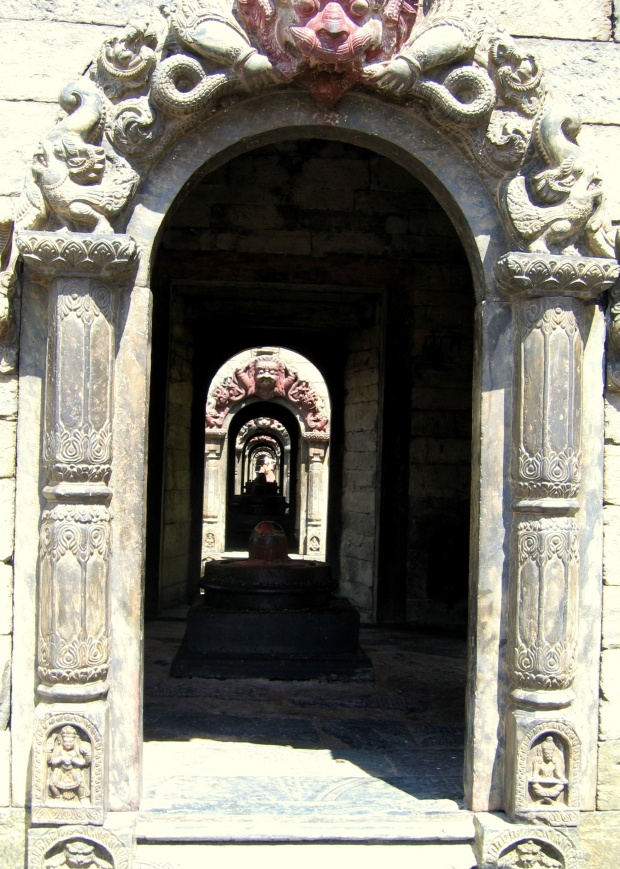 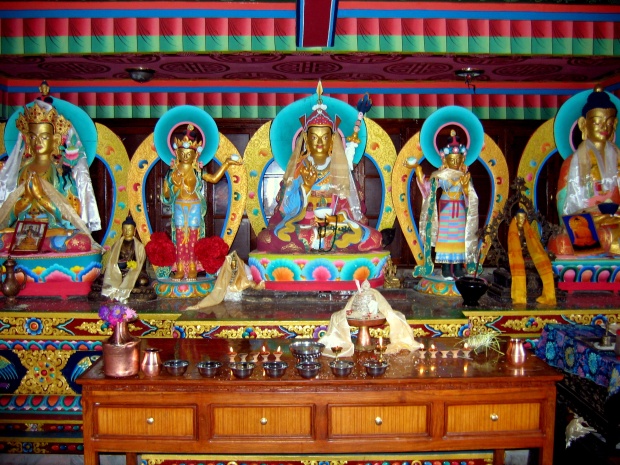 And across town, the poet savant acquiesces
to the rhythms of the Maha Asthami,
prostrating mechanically .. again and again and again ..
until she finally awakens in ecstasy to the sought after
reality of her dreams.
And as she robotically forsakes the Dashain ghar and
throws open a window, she discovers that all life has
indeed come to a standstill with the exception of
a few tourists snapping photographs.
But the poet savant remains lost in her own deep transformation.
The setting sun forewarns the approach of Kal Ratri,
and the darkness of the darkest night weighs
heavy and pungent with the odour of meat.

Knee-deep in blood,
the poet savant wades
through the temple of Taleju –
marching in step
to the military band
and gun salutes
in honour of
the Goddess Durga
and Vishwa Karma,
God of Creativity.
The air is black
with the smell of
slaughtered buffaloes.
Protection is assured;
and all are blessed –
by the army
of the Divine.

Namaste.
The secret of the blessing lay in the
passing of divine compassion and
goodwill from generation to generation.
Namaste.
The embodiment of my love
is in the tika and the jamara.
And together we will wait for Laxmi.
This is my promise .. this is my prayer.
This is my gift to you.
Namaste. 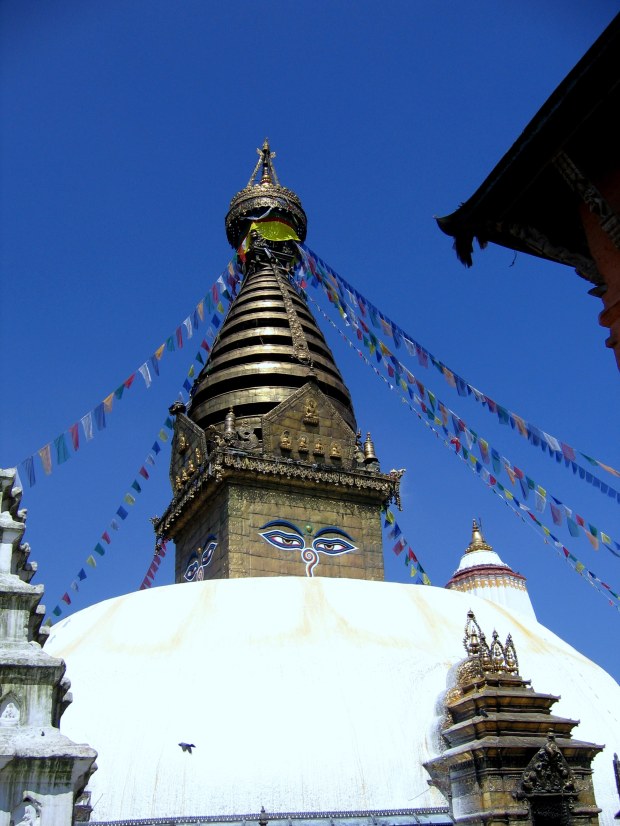 Dizzily, I stumble out onto the pavement of
Freak Street, my mind still awhirl with the
images, tastes and sounds of the past fortnight.
In the maze of bustling pedestrians bumping into me,
and taxis, rickshaws and bicycles whizzing by,
I vaguely recognize the poet savant –
now in disguise as a common beggar.
All seems to have returned to normal in the Valley,
now that the blessings of Durga have been received;
so much so that I begin to wonder how much was real
and what was, in fact, fantasy – when suddenly I find myself
face-to-face with a child of some seven or eight years –
barefoot, in tattered clothes and with outstretched palms:
“Coins, cigarette, milk or chocolate???” he pleads.
As I place a few coins into his hands he smiles and says:
“Bless you kind Sir. May Good transcend Evil, and
Light lessen the Darkness you carry within you.”
And I smile to myself, certain that I am carrying
the treasures of Dasain deep inside me for at least
the next twelve moons while mumbling
“Om Mani Padme Hum .. Om Mani Padme Hum ….” 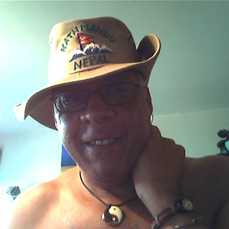