Books by, and about, Adam.

From the archives: Fran Beallor‘s fabulous illustrations in my first book of poetry (1987):
My first book of poetry (also my very first published book) was entitled “Notes of a Madman”, published by Winston-Derek Publishers, USA, 1987. It was a short, hardcover containing spiritual-psychological poetry. I was fortunate indeed that my good friend Fran Beallor whom I had met at Antioch College, previous to our rediscovering each other later in New York City, agreed to illustrate several of the poems. The book is long since “out-of-print”, and the publisher went bankrupt quite a number of years ago after a few scandalous affairs. Neither Fran nor I made any money from the small book but the poems were later included in my “Collected poems and stories”, Cyberwit, 2005. I only have one beat-up copy of the book, and I thought that it is perhaps time to scan and show the wonderful illustrations that Fran made. If you do not know Fran’s work you should definitely look her up on Facebook or on the internet. She is a phenomenal artist, and one of the kindest and most sensible persons I have ever known. 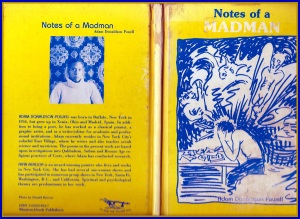 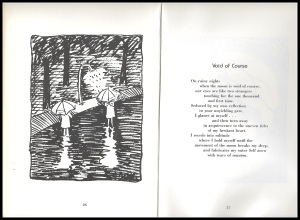 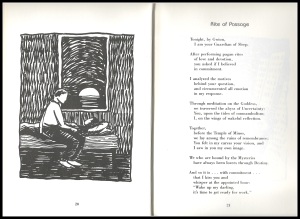 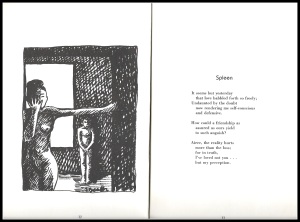 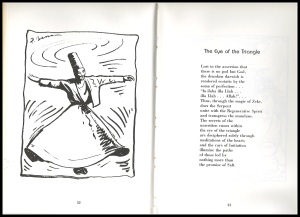 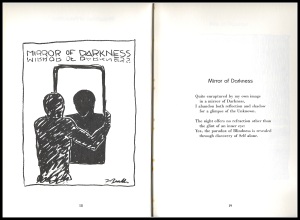 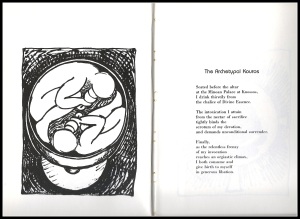 My first public performance of my poetry in New York City was at a trendy art gallery in the SoHo district, back in 1986. The place was packed, wall-to-wall, and the audience was enthusiastic. I was reading from my soon-to-be-published first book of poems, entitled “Notes of a Madman” which was an illustrated collection of mystical poetry from Pagan and Sufi traditions. The gallery owner, an enigmatic young man, was particularly obsessed with the poems and spiritual messages in the slender volume of verse, and he read the book over and over again. Some months after the reading I again called the gallery to say “hello” and another young man answered the phone, saying in a somber voice: “Didn’t you know? He passed away shortly after your reading.” He had died of AIDS.

That beautiful young man hung onto my verse in a time of deep personal transformation. I have never forgotten the awe and sense of responsibility I felt after that telephone conversation. Since then, I have always written and painted with the intent of inspiring creativity and transformation in humanity. And now that I have — myself — lived with the AIDS virus for twenty years it feels appropriate to inspire once again through writing about one of the greatest transformations Mankind can ever know. It does not matter what we die of … every Soul and Life Expression is precious, and to be celebrated.

One thought on “Fran Beallor’s illustrations in my first book of poetry (1987).”